Witnessing marine scientist Ada Crantock processing oysters for her Honours experiments prompted a reassessment of my own creative process. I was reminded that my methods as an artist frequently mirror those employed by scientists as I progress from the unknown to known both from the perspective of real-world information and creative responses. Record references this creative journey by assimilating a sculptural and audio component – product (casts of the interior of oysters used by Ada during her experiments) and process respectively.

The creative decision to reveal the interior volume of the shells in part acknowledged the significant ecological role played by oysters through their filtering of vast quantities of water. This trait makes them ideal subjects for scientific study and ironically resulted in the cast oysters giving their lives. 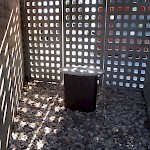 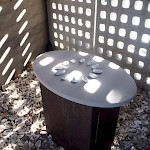 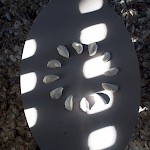 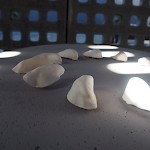