Launched to great fanfare in Woolwich, London, in 1814, HMS Nelson by some reports was the largest wooden sailing ship built in England. As a first rate ship of the line she was seen as a successor to Nelson’s Flag Ship HMS Victory but despite her grandeur, scale and firepower, during the next century the Nelson never saw active service as a ship-of-war. Rather she was progressively deconstructed to eventually become a coal barge plying the Tamar and Derwent Rivers. In 1920 she was towed into Shag Bay, broken up and burnt to salvage the remaining copper and bronze. Today vestigial remains – fragments of timber, copper nails – can still be seen when the tide recedes.

Trace responds to the Nelson’s life by defining the outline of her hull when she was used to haul coal, symbolically reviving her memory. Part memorial, part place marker and part invitation to explore a sites’ history, Trace is a reminder that the past remains with us in the present and though unseen and largely forgotten can reside just below the surface. 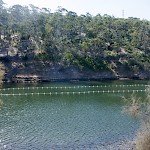 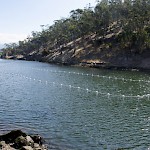 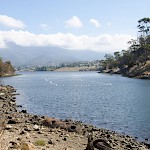 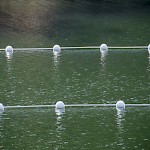