That the substance of cities is derived from natural resources can be overlooked, especially in large population centres were the constructed environment has a tendency to eliminate nature or control what little remains. Plantation depicts an imaginary cityscape with ‘buildings’ arranged as a defensive castellation. Despite this posture, nature is here, it is everywhere; it is what cities are built of and on. It is appropriate then that the ‘city’ rests on a ‘foundation’ of small diameter pine logs (positioning nature centrally in literally a supporting role). Plantation refers to the conversion of natural resources by using radiata pine in three different states; unprocessed, processed and waste. The waste element is emphasised by positioning that produced while making Plantation within the interior space, an arrangement that alludes more generally to the frequently high amount of waste generated by society. The significance of waste is further highlighted by leaving a narrow vertical gap in the perimeter wall, a feature that allows this material to spill onto the floor outside the footprint of the ‘city’. 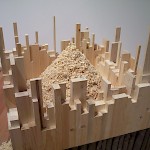